My 13 year old grand-daughter, Vivian, was spending the night with me last weekend and since her two brothers were also, a slight sleeping problem arose.  Which one of them was going to have to spend a night sleeping on the floor?  Well, the second night the lot fell to Vivian.

I made up a nice comfy bed for her in front of the fireplace with some extra couch cushions and comforters that I had on hand and then I suggested everyone settle in for the night.  As soon as I switched off the light Vivian began to wail  “But what if there is a spider down here!”

She was convinced that a spider was out to get her and was sure if she could sleep up higher none would be able to reach her.  All my reasoning that spiders could climb up or on anything or anywhere didn’t convince her.  She was sure a spider was lurking right nearby her, just because she was sleeping on the floor.

So, to ease her mind I decided to tell her about the Happy Face Spider and said if any spider was around in my house it was probably a Happy Face who wouldn’t harm her, but might decide to tickle her to make her laugh.

When you see a picture of a Happy Face Spider you just can’t help but smile and be amazed at God’s handiwork.  This spider has markings on its abdomen that look just like a smiling face. 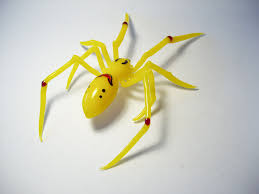 On the Fifth day of Creation when God created cattle, beasts and everything that creeps on the earth, He saw that it was all good, and perhaps as He was looking over all His new creations He was smiling, as His hands were forming the tiny Happy Face Spider.  The Happy Face only lives in the rainforests of Hawaii.  They are very shy and usually hunt for small insects at night.  Scientists think that their unusual markings could somehow be a deterrent that keeps them from being eaten by birds, after all what self respecting bird would be caught feasting on something that was smiling at him.  Personally, I think it is just some of God’s humor showing forth in His creation, for there is also such a thing as Smiling Grass—but….that is a subject for another time…

Not a lot of information can be found on Happy Face Spiders, however I will include a couple of interesting links you might want to check out for further information.

Oh, and back to my grand-daughter and the rest of the story….well, of course she didn’t believe me, not because she knew Happy Faces were only found in Hawaii, but because she did indeed really see a

common black spider lurking in the corner of the room,  perhaps just waiting for his chance to pounce on her when the lights went out.  Go figure!