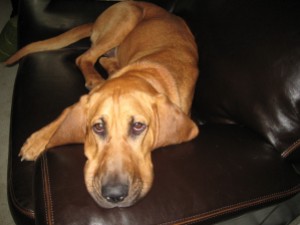 My heart goes out to my Facebook friends caught up in the tornado watches and extreme weather. One FB friend lives in Moore.  I’m happy to report her house and hounds are all safe.  So is she.  But it’s especially hard for me to watch the images on TV of injured people and animals coming out of the wreckage.

Back in 2006 I lost my home and virtually all my possessions to a natural disaster. I kept a blog about my journey (since taken down), and someday I’ll share those posts again.  Just not now.  Strangely, reading all the tornado-related FB posts and comments doesn’t make me think of that time in my life. Instead, my thoughts were on the pets of those affected by the tornado.  And then I  started thinking about my pets, and my history with hounds.

So, I thought I’d share a bit about myself and my dogs.

My parents raised Chows.  Aloof protectors, I loved our dogs, but never felt that greater connection to a dog until I met Max.  Max, a Rhodesian Ridgeback-Pitbull cross, technically belonged to the neighbors, but for several years he spent 40+ hours a week at our place.  I was devastated when he passed away on May 5th of 2008.  (We’d just moved back in months earlier.)

Upon reflection, I think I may have rushed into my next dog, Frankie.  I adopted her on June 16th of that same year.  I’d always loved Bloodhounds, read up on the breed, and was absolutely certain I knew what I was getting into with a hound.

Ummm, no.  No one is ever prepared for their first Bloodhound. 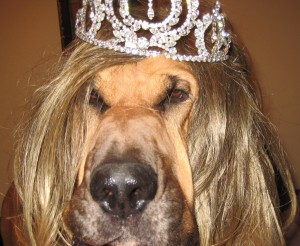 [5] At that time, all I knew was that I wanted the opposite personality of Max, because no dog could ever replace him, and I didn’t want to be reminded of traits I missed so much.

Boy-oh-boy did I ever adopt the total opposite personality!

Max: loyal, prey-driven, obedient to a fault, learned commands quickly. Almost never on leash, even out in the brush where I couldn’t see him. Yet I’d call and he’d be bounding through the underbrush to return immediately.

Frankie is my first Bloodhound.  In my childhood, my Bloodhound was a stuffed toy I cherished. Sometimes I call Frankie my “starter hound”… because eventually I’ll adopt another.  She’s a smallish 85-pound hound with a busted tail.  The tail didn’t happen on my watch. I adopted her at 2 (?) years old, and 65 pounds, from a Lab rescue where she and the other dogs were fed once a day.  These folks did the best they could and I am grateful.

Frankie came with a lot of issues, which is why she is a one-and-only hound. Her biggest issue is, of course, food!  If you’re a Bloodhound person reading this you’re probably laughing your head off thinking, what hound doesn’t have food issues?  (*SIGH* You’re right!)

Anyway, she FREAKS OUT on other dogs who happen to be around food.  Any food. Otherwise she plays well, just as long as treats aren’t involved.  This limits socialization, but not group walks or training.

On training: she’s stubborn.  I’ve tried obedience.  The entire class cracked up with laughter as Frankie became more and more determined to not do anything I asked her.  For example, it took three of us, me the trainer and the trainer’s assistant to get her to lay down.  Me pushing her shoulders down and the other two easing her front paws forward.  Frankie tensed her entire body, like a steel tripod, refusing to cooperate.

At home, relaxed, she’s pretty good with commands. Right up until she decides not to do something.  I’ll give her a command (“sit!”) and she’ll crane her head up, bat those beautiful eyes, and ignore me.  It’s like she’s saying, I know exactly what you’re asking me to do and I’m not doing it.

I might even get a little tail wag with that “no.” So there!

She’s a gentle girl who worships, and fears, cats. She’ll get spooked by litter floating in the breeze, but she’s fine around gunshots. She’s always on leash except when she’s in a fenced area or inside.  Her brain seems to be 98% in her nose. Doorbells drive her bananas. And sometimes, when I look in those gorgeous brown eyes of her, I’d swear she is my grandmother reincarnated.

Maybe that sounds a little kooky and I shouldn’t have shared that here, but what the heck. I really do think she is my mom’s mom returned.

So I’ll end this post on a question: do you think our loved ones can reincarnate as our pets?