When I woke this morning at 6am, he was already gone. My dad, that is. I don’t know what time he left to get back to the hospital with mom. The night before last he slept here until 12:30am and then was back by her side by 1am to be sure she was alright. There’s no extra bed in her hospital room, so he just sits in a chair by her side. He helps her go to the bathroom. Cleans her up, gets her water, makes her laugh. He challenges her to do one more leg lift, insists she do 10 “windshield wiper” exercises and then produces–to her great delight–a dark milky way candy bar from his jacket pocket. Her reward. 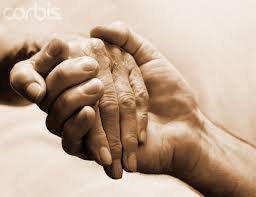 The truth is that he is her reward.

My dad is the greatest earthly gift my mom could ever imagine. This year my he will turn 69 years old. He and mom have been married for 40 of those. He is the hardest working man I have ever met. When he was 15 he wanted his own bedroom so he built one on to his parents’ small house–by himself. Bought the materials and built the whole darn thing all by himself. That tells you a little bit about my dad. He once wanted to repaint his car so he converted an old shop-vac into a paint sprayer and did it himself. He played college football at Linfield. He served in the Vietnam War. He was Athletic Director and coach for more years than I can count. He built all three of our homes with his own hands … after getting home from work.

But now is the real work.

The toughest coaching job he’s ever had.

The greatest battle he’s ever fought.

Mom’s battle is his battle because they are one. My mom has Parkinson’s, as many of you know, and just recently had her second hip replaced. She’s having some trouble recovering, so she’s still in the hospital doing rehab. Because it took so long to get into surgery, she spent the last 3 months unable to walk at all. Dad, the man used to having dinner served to him for the last 40 years, jumped in with both feet–the only way he knows how too–and learned how to do it all himself.

He cooks. He cleans. He grocery-shops. He gets up multiple times at night to take her to the bathroom. He dresses her, cleans her, and kisses her while he’s at it. He scrubs floors, does dishes, pays bills. He loads her in and out of the car, driving to doctor appointments. And now he sits by her hospital bed, quietly coaching: lets do 10 leg lifts, 5 more windshield wipers, no don’t go to sleep Karen, keep at it, we’ve got to get you home. He’s spent his life with a clipboard in hand and whistle in his mouth, shouting plays and running drills and pushing athletes. Now he sits holding her hand, no whistle, no shouting, but still the most amazing coach I’ve ever known. Ten more, Karen. You can do it, babe.

While there, a young nurse timidly peaks her head in their hospital room.

“Could I ask you a question?” She looks at dad. ”You’ve been married for 40 years. I just got married last year and I want to hear from you, because you obviously know. How do you do it?”

Dad smiled and looked at her. “Pray together every day.” He left it at that. I dare say the rest of the sermon was preached through his 24/7 selfless care of his bride. His life preaches whether he knows it or not.

Yesterday he asked me to stop on my way to the hospital and get her some new clothes to wear while she’s there. I prayed my way through Target and found the perfect thing, in her favorite color. Today on the phone dad said, “She’s wearing her new outfit and she looks hot!”

Not just to serve, but to lift up. Not just to coach, but to inspire courage. Not just to sleep at her side but to assure her that she’s beautiful in the midst of a most unbecoming circumstance.

This world offers us very few glimpses of true love.

But this is one.

The 4-West wing of SW Medical Center has seen a little glimpse of Jesus this past week.

Thanks, Dad, for showing me what love looks like. You’re amazing.