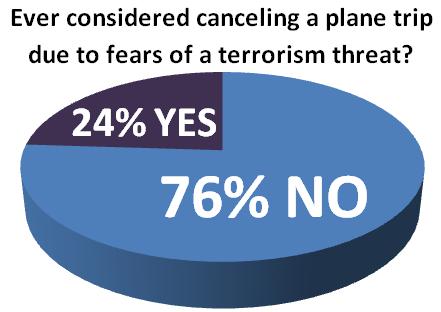 After the Christmas day plane bomber Oregon Women’s Report readers were asked if they might feel like canceling a plane trip due to increased terrorism fears.  By a two-thirds majority most women say they feel confident and safe enough to continue their air travels.

– Many years ago when I was planning on going to Germany, and terrorists had just blown up an American Club.

– I haven’t flown since September, 11th

– Yes because I feel they are very real

– However, I no longer want to fly because Homeland Security does not do their job and because they haven’t, flying has become invasive and inconvenient.

– I would cancel a flight because what I see scares the daylights out of me.  It would make flying a nervous wreck which is already stressful to me.

– Our skies have been safe for nearly 10 years.  Why fret now?